An Interview With Osocalis Distillery 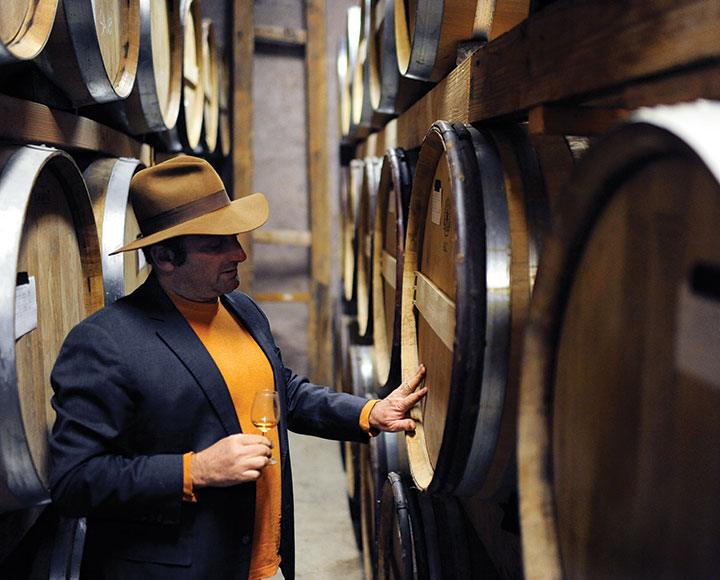 Europe may be brandy’s ancestral home, but American distillers are increasingly turning their attention to this most regal of spirits. Among the earliest of the current crop of brandy distillers was Osocalis Distillery, based near Santa Cruz, California. Here, in his own words, Osocalis founder and distiller Dan Farber opens up about how he wound up on the path to brandy, how Osocalis is making New World mark on a traditionally Old World spirit, and what Farber sees as the future of American brandy.

We first started distilling in the 1980s, but we didn’t release anything until 2001. Hubert Germain-Robin [cofounder and longtime producer of Germain-Robin brandies] was a friend and colleague and had always helped me out, and I’d distilled with him numerous times. I liked his brandies, and I enjoyed a good bottle of Cognac, but I didn’t have the ability to put something on the market that I felt was competitive, quality-wise, and it took a long time for us to get to that point. Hubert told me I needed to put something on the market, and he came down to help put together a blend using some of my favorite brandies.

I’d originally wanted to make whiskey—it starts where brewing ends. But after thinking about it for a while, I decided I wanted to begin an endeavor that had a chance of doing something truly world class, and it seemed contrived to me to try to make Scotch in California. I just couldn’t answer the question, ‘Why that, and why here?’ The answer to those questions seemed to be brandy, because California has absolutely world-class fruit. I knew that [Clear Creek Distillery founder Steve] McCarthy and [St. George Spirits founder] Jörg [Rupf] were making eau de vie, and that there were other eau de vie producers around, so I went to Europe to see how grape and apple brandies are made. It made sense to me to make eau de vie—at the time, Silicon Valley still had tons of apricots and other types of fruit in the region—but ultimately I found I was enamored by the aging process, so I turned to classical brandies, made on an alembic Charentes—a French cognac still.

Of all the brown spirits, brandy is the most expensive to make. Grapes are much more expensive than grain, and you can’t store those raw ingredients—you have a much shorter window of time for fermentation and distillation, so it’s down to about 3 or 4 months a year that you can use all of your infrastructure investment. You don’t find a lot of interest among investors to get into brandy because of that—there’s a negative feedback loop, there aren’t as many people getting into it, so the perception to the consumer is there’s less going on in brandy. But that’s starting to change.

I think it’s extremely encouraging that so many other distillers are coming into brandy. I would also like to see people embrace those classic brandies—Cognac and Armagnac and Calvados and great eau de vie and schnapps—as much as whisky drinkers embrace Scotch. If everyone had such a deep appreciation for those classic styles, and how they’re made, I think that would go a long way on both sides. 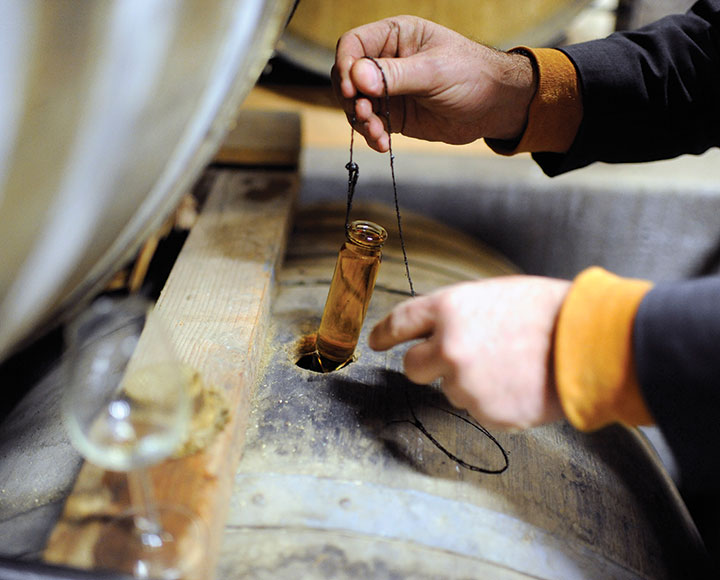 Cognac has to be made on a simple, direct-fired still, and that’s to protect quality. We don’t have that requirement, but brandy from those types of stills has the ability to age very well. Cognac also uses a limited number of grapes, and almost all of it is from Ugni Blanc, but in the U.S., we don’t have those restrictions, either. That’s allowed distillers—especially here in California—to experiment with Pinot Noir, and Sauvignon Blanc, and Chenin Blanc and Viognier. Germain-Robin pioneered a lot of this, doing experiments 30 years ago with Palomino, Muscat, and other varietals, that demonstrated that the grapes available to us in California were truly world class for making brandy. This became a competitive advantage—we can try things here that they can’t in Cognac.

In California, we’re not changing any of the basic techniques—we distill using the same method as in Cognac, and we take our fruit in a similar way as to what’s traditionally been done—but because we’re using different grapes, and getting it from a different climate, we put it together to make something stylistically distinct, but still very much a part of the brandy family.

We’re just now reaching generation 2.0 of American brandy. Today, we and a lot of other people are planting vineyards specifically for brandy production. That’ll be the next-generation game-changer for brandy in the U.S., and you’ll see more people around the country interested in getting in from the beginning—growing fruit intended for brandy, and not for wine. Even our guys who we’ve been working with for decades, they didn’t plant those vines for us—they planted them for wine. Now, what we see on the horizon, is people for the first time investing in putting roots in the ground for brandy. That’s the most exciting thing happening at the moment.

Read more about American-made brandies in the May/June 2015 issue of Imbibe.