Why Alice Feiring Wants You to Dig Into Dirt 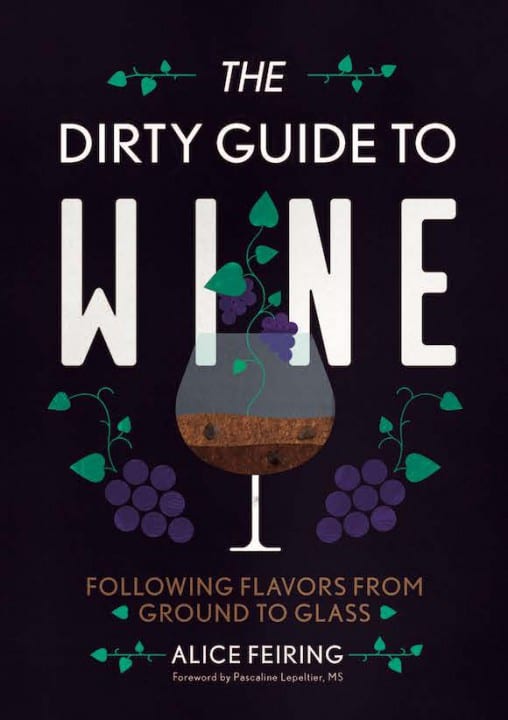 Think of the last glass of wine you ordered. Odds are you chose a style you typically like, say a crisp Pinot Gris or a spicy Zinfandel. Maybe you considered region—the Loire Valley or Napa Valley, Bordeaux or Barossa. But in a wine culture where varietal and region have become the default deciding factors, wine writer Alice Feiring is offering a perspective that goes back to the root or, rather, the dirt. “For centuries it wasn’t Pinot Noir, the wine was called Beaune. It wasn’t Cabernet; it was wine from Napa… Until very recently a wine’s place was far more important than the grape,” Feiring explains in the introduction to her new book, The Dirty Guide to Wine.

The emphasis on grape variety came into play in the late ’80s and early ’90s, when a marketing tack dubbed the “fighting varietals” saw producers like Glen Ellen selling grape-specific bottles for $4 to $6. “It was so hugely successful that it became a new world model,” says Feiring. “But it has gone too far because it’s not only the way people select their wines now, but the way people grow their vines and choose what they grow.”

It’s a point of view that fosters the idea that anything can be grown anywhere, Feiring says, so why not simply grow the most profitable grapes? Disregarding the soil and the impact it has on a vine, its fruit, and the resulting wine runs counter to the concept of terroir—a wine expressive of its place. And though “minerality” may have become a debated buzzword in the wine world, with those who dismiss the term pointing to the noted lack of detectable minerals, Feiring can’t ignore the connection between the wine in her glass and the rocks beneath her feet. “I just knew from the moment I started spending more time in vineyards, rather than just swirling and spitting in my living room,” she says. “I was driving from Burgundy to the northern Rhone, and I remember when I saw the land shift from limestone to granite, and it was just one of those ‘duh’ moments.”

It was also a moment when the idea for her latest book started germinating. A wine list she encountered in Alsace in 2012 that organized wine purely by geology further formed the concept, and when Feiring found herself in conversation with Joshua Greene, publisher and editor of Wine & Spirits, about the continued obsession with grape varietal, he asked her what she planned to do about it. She knew it was time.

Feiring tapped master sommelier and fellow natural wine advocate Pascaline Lepeltier, who currently helms the beverage program at Rouge Tomate. Together they roadtripped through Europe, drinking wine and digging in the dirt. “We learned about the gap between intuition and rational knowledge,” says Lepeltier. “The book was a thrilling project in that instead of bringing answers, it activated way more questions and opened new perspectives on how to taste.”

Feiring divides The Dirty Guide to Wine into the three overarching categories of igneous, sedimentary and metaphoric, with the different types of rocks (and soils) in each category and the wine regions that display them. Though she notes that only drawing comparisons between different varietals grown in the same soil type would be too simplistic and subjective, she did notice some interesting connections. “With volcanic soils, I almost always get this ashy quality on the finish, and that’s from basalt soils,” she says. “One of the most profound experiences for me was when I did a tasting with Frank Cornelissen from Mount Etna. I did a tasting of his wine, his olive oil and his grappa, and I got a similar finish on all of them and it blew me away.”

It’s an approach to wine tasting that’s catching on. Dedalus wine shop in Burlington, Vermont operates the Dirt Wine Club, putting together collections of bottles that highlight a single grape across multiple terroirs, or multiple varieties from a single vineyard’s soil. “To give people a real sense of the common thread that place weaves through a wine, we often feature different wineries, bottling the same variety in the same terroir,” says Dedalus owner Jason Zuliani. “To me, minerality represents a larger set of indicators. Its presence or absence tells me a bit about where the wine comes from and how it’s made.”

Though Feiring says that much of what we describe as minerality really means perceived minerality, thinking about the soil can still lend a new perspective with which to taste and interpret wine. As Lepeltier notes in her forward, “This is not a book to give proof that you can taste rocks in your wine. It is an emotional one in the way that the only wines worth drinking are emotional. [It is] an invitation to connect places and bottles, through the looking glass of soils.”