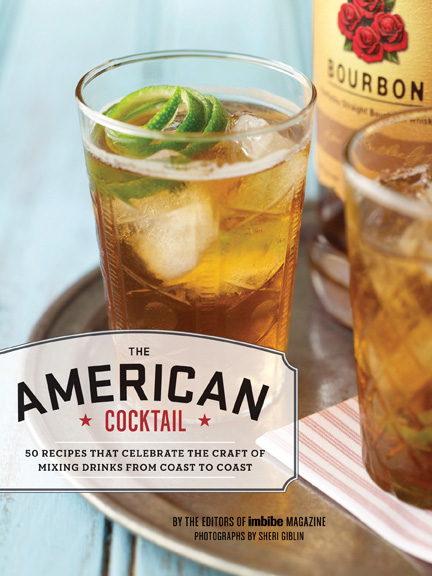 Imbibe‘s first cocktail book, The American Cocktail, is available in bookstores across the country, or you can purchase copies by clicking here.

America has a long and storied history with spirits and cocktails. As immigrants from around the world settled in cities and towns across the country, they brought the culinary traditions that inform the way we drink today. Thanks to the industrious, whiskey-loving settlers of the South, we have Kentucky bourbon country, and if it hadn’t been for nostalgic Italian immigrants, California’s Bay Area might not have experienced its love affair with Italian amari. While these influences remain as steadfast as ever, America’s melting pot of culinary traditions has also spawned new trends across the country, from the fresh, seasonal cocktails of the West Coast to the classically inspired drinks of the South. What’s more, uniquely American ingredients have found their way into some of the country’s best cocktails, from bacon-infused bourbon blended with ginger ale that was brewed in the country’s oldest bottling facility to a loquat-and-lemon cocktail mixed with vodka made in Texas’s oldest legal distillery.

Now you can experience these drinks for yourself. The 50 cocktail recipes featured in The American Cocktail come from some of the most talented bartenders across the country and feature regionally produced spirits, sodas, fruits and herbs. Whether it’s a marionberry bramble from Jeffrey Morgenthaler in Portland, Oregon or a strawberry julep from Jenni Pittman Louisville, Kentucky, the cocktails that define the American landscape are deliciously diverse. Consider this book your personal cross-country tour of America’s most intriguing regional cocktail flavors, traditions and stories.

What Others Are Saying About The American Cocktail

If you love cocktails and revere mixologists but don’t always want to go out to enjoy your libations, you should thank your lucky stars that the editors at Imbibe have put together The American Cocktail: 50 Recipes That Celebrate the Craft of Mixing Drinks From Coast to Coast. From fresh takes on classics  to completely new creations, this recipe collection will keep cocktail aficianados busy recreating drinks by mixologists from across the country.
—Epicurious

The American Cocktail comes to us from the editors of Imbibe Magazine, and it often combines the unpretentiousness of See Mix Drink, the swank adventurism of PDT, and the photographic beauty of Bitters. Subtitled 50 Recipes That Celebrate the Craft of Mixing Drinks From Coast to Coast, it gathers a “St. Louis Southside” and a “Boston Bog,” a “Copper Fox Cooler” from Virginia and a “Pig on the Porch” from South Carolina. From Louisiana, it collects the “Comfortably Old-Fashioned,” which uses Southern Comfort as its base. In its sweetness, this one’s on the grandmotherly end of the old-fashioned spectrum, but it has its charms—provoking nostalgia for one’s youth, for instance. Southern Comfort is, of course, a peachy whiskey-based liqueur especially popular among college students, who drink it in prelude to preposterous behavior centered on SEC football games, ACC basketball tournaments, and Ivy League sorority pledge nights.
—Slate Magazine

Featured in the book The American Cocktail: 50 Recipes That Celebrate the Craft of Mixing Drinks From Coast to Coast by the editors of Imbibe Magazine, the Kelso daiquiri is described as “a perfectly charming Southern twist on a classic beach cocktail.” It’s the creation of Josh Habiger, owner of The Patterson House in Nashville. Habiger invented the Kelso daiquiri as a way to bring the traditionally tropical daiquiri to the whiskey-drinking South. An exotic cocktail without the exotic destination, this tasty treat is perfect for those breezy fall evenings spent on the patio at home or when you just need a quick getaway from life. Lucky for you, airfare rates do not apply.
—Fort Worth Star-Telegram

It’s about time someone wrote a cocktail book that was geared towards both bartenders and serious cocktail aficionados and that home entertainers could relate to. Here you’ll find fifty recipes that bartenders across the country have contributed — classic cocktails and modern twists on drinks your grandparents probably once enjoyed. Along with the recipes, there’s a small peek into the history behind each.
—The Kitchn

Imbibe writing is spirits-heavy, but covers drinking broadly, so any given issue may have stories on tea, soda, coffee, wines, beer, cider, or even water. Producing a cocktail book was a natural course for them; I’m glad to see the editors finally got around to it. Headnotes on fifty recipes in the book give historical context, ingredient notes, and drinks origins. The recipes themselves are from bartenders across the USA and are broken into areas of the country where regional ingredients from sassafras to huckleberries lend a sense of place to all of them. Without getting to the elaborate preparations of molecular mixology, the book gives a pretty representative look at what drinking looks like in craft cocktail bars around the country. Wisconsin Kringle syrup to liven up your brandy, anyone? What about a persimmon margarita? An eight-page appendix of American craft distilleries is a particularly welcome addition, as is specifying particular spirits from local distilleries throughout the book. Yeah, yeah, distribution is limited for a lot of the spirits, so you can usually swap out the specific spirit with a similar one you’ve got on hand, but hats off to the bartenders and editors for making the point to call out local liquor in many of the recipes. Hunt around online; you can often find merchants willing to ship local wet goods to your door.