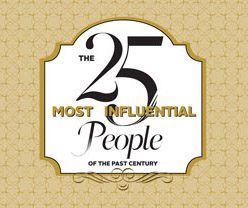 The May/June 2010 issue features the 25 Most Influential Cocktails of the Past Century. Narrowing down that list got us thinking about the people behind some of those cocktails, so we thought it only fitting to curate a list of the 25 most influential cocktail personalities of the last 100 years. For this list, we considered the type of influence someone has had on the cocktail world as well as the duration of that influence—and keep in mind that these are people who have specifically influenced cocktail culture, not spirits. Whether they’ve created an iconic cocktail, spawned a cocktail trend or dedicated themselves to educating the public about the craft of cocktails, the following 25 people (listed alphabetically) have undoubtedly impacted the way we all drink cocktails today, and for that, we toast each of them.

Tony Abou-Ganim
Tony Abou-Ganim began his bartending career in 1980, and three decades later, he’s influenced countless bartenders and has built an empire of modern bartending, including a line of bar tools, numerous television appearances and his recently released book, The Modern Mixologist.

Donn Beach
The forefather of modern tiki and creator of the Zombie cocktail, Donn Beach (born Ernest Raymond Beaumont-Gantt) opened his first Polynesian-themed restaurant Don the Beachcomber in Los Angeles in 1934. Spawning a multi-generational tiki craze, tiki wouldn’t be what is today without him.

Ada Coleman
As the head bartender for the American Bar at The Savoy Hotel in the early 20th century, Ada Coleman was one of the first well-known female bartenders. She mentored Harry Craddock and mixed cocktails for famous authors, royalty and actors—the latter of which, Sir Charles Hawtrey, inspired her to create the Hanky Panky, which was among the first cocktails to incorporate Fernet Branca.

Harry Craddock
American-born Harry Craddock left the States during Prohibition to continue his craft abroad, taking a job behind the American Bar in London’s Savoy Hotel. He is credited with popularizing the dry Martini and went on to publish The Savoy Cockail Book in 1930—a book that has become an immeasurable resource for mixing the classics.

Dale DeGroff
Dale “King Cocktail” DeGroff gained a following in the mid 1980s at the helm of New York City’s Rainbow Room bar as a preeminent proponent of classic cocktails and fresh ingredients, and over the decades since, he’s inspired legions of bartenders to be better at their craft. Author of The Craft of the Cocktail, DeGroff has developed numerous cocktail recipes, is the recipient of several prestigious awards and is the founding president of the Museum of the American Cocktail.

Patrick Gavin Duffy
As the bartender of New York’s Ashland House for some 40 years, Patrick Gavin Duffy served drinks to famous faces like Mark Twain, Oscar Wilde and J.P. Morgan, and he chronicled their favorites tipples in his well-regarded books The Official Mixer’s Manual and The Standard Bartender’s Guide.

David Embury
Neither bartender nor journalist, David Embry was the first connoisseur to publish a cocktail book simply based upon his affinity for well-crafted mixed drinks. His immensely popular book, The Fine Art of Mixing Drinks, was published in 1948 and is considered the first cocktail guide for both hobbyists and pros.

Hugo Ensslin
German-born bartender Hugo Ensslin wrote Recipes for Mixed Drinks in 1917, a book that would become New York’s last published bartending guide before Prohibition. It included the Aviation cocktail for the first time in print as well as new ingredients of the day like grenadine, applejack and triple sec. Ensslin is considered a major influencer of Harry Craddock and Patrick Gavin Duffy.

Ray Foley
A former Marine and bartender, the always outspoken Ray Foley (no relation to Imbibe founder, Karen Foley) launched Bartender Magazine three decades ago, serving for a long stretch as one of the few magazines dedicated to bartending. He’s authored several bartending books (as well as a few joke books) and founded The Bartenders’ Foundation, a non-profit that raises scholarship money for bartenders and their families.

Ted Haigh
Known as Dr. Cocktail, Ted Haigh has become the leading authority on vintage cocktails and spirits. As an author, Imbibecolumnist and Museum of the American Cocktail curator, he’s become an unparalleled advocate for rediscovering what’s lost or forgotten in the world of cocktails.

Robert Hess
This “technology evangelist” for Microsoft is also something of a cocktail evangelist, reminding the world that cocktails should be made with the same craft and care as gourmet food. He’s a co-founder of The Museum of the American Cocktail and a co-founder of The Chanticleer Society, a website attracting cocktail enthusiasts from around the world. He’s also the brains behind drinkboy.com, the author of The Essential Bartender’s Guide and host of The Cocktail Spirit.

Harry Johnson
The first edition of Harry Johnson’s Bartenders’ Manual was published before our century cutoff, but this landmark book is still being reprinted to this day, and bartenders around the world look to it for guidance in honing their craft. Perhaps what makes Johnson’s approach especially significant is that his book was the first how-to, articulating how to be a bartender (not just what to make), and the wisdom Johnson imparted then still applies today.

Chris McMillian
As much a New Orleans institution as the Sazeracs he serves, career bartender Chris McMillian is a living piece of Nola cocktail history. His bartending style is one part historian, two parts storyteller, and his pitch-perfect Mint Juleps are a legend in their own right.

Harry MacElhone
When Harry MacElhone took over the New York Bar in Paris, he slapped his name on the front and quickly created an institution. Said to be the birthplace of such classics as the French 75, the Monkey Gland and the Bloody Mary, the bar is one of the most famous watering holes in the world.

Sasha Petraske
At the dawn of the 21st century, when Cosmos and Jager shots were still the drinks of choice, Sasha Petraske sparked a classic-cocktail revolution when he opened the members-only speakeasy Milk & Honey on New York’s Lower East Side. Since then, dozens of speakeasy-style bars have cropped up across the country, and Petraske has built a mini-empire, including White Star, Little Branch and Dutch Kills.

Brian Rea
After decades of mixing drinks in such lofty locales as the 21 Club in New York, Brian Rea turned his talents toward teaching, developing and conducting bar management programs for UCLA and Cal Poly University, as well as the National Restaurant Association. The author of Brian’s Booze Guide and Brian’s Bartender Guide, Rea’s collection of rare cocktail books and ephemera is considered to be the most extensive in the world.

Gary Regan
With countless newspaper and magazine columns, books and newsletters to his name, Gary Regan is known the world over as one of the most-read cocktail experts around. Whether he’s lecturing at The Smithsonian, conducting workshops or maintaining the Worldwide Bartender Database, he’s helped raise the world’s mixological awareness.

Audrey Saunders
Not long ago, housemade cocktail ingredients like bitters and tonic water where a rarity behind the bar. Then in 2005, Audrey Saunders opened Pegu Club in New York, a bar that helped put the “craft” in the classic cocktail movement. By using housemade ingredients to update old-time recipes, she brought long-forgotten drinks into the 21st century’s spotlight.

Jerry Thomas
Yes, he came and went before our 100-year cutoff, but considering that Jerry Thomas continues to influence cocktails and bartenders to this day, we think his impact is timeless. Considered nothing less than the father of American mixology, his seminal The Bar-Tender’s Guide (alternately titled How to Mix Drinks or The Bon-Vivant’s Companion), published in 1862, was the first cocktail book ever published in the United States. Not only that, his larger-than-life personality and showman’s skills—he was famous for mixing flaming drinks—set the tone for every bartender who came after him.

Kazuo Uyeda
Kazuo Uyeda began tending bar in the ’60s, going on to become one of the world’s most respected bartenders. He’s won numerous cocktails competitions, authored several books, including Cocktail Technique, and elevated awareness of Japanese bartending techniques around the world, including the hard shake, a method now championed by a whole new generation of talented bartenders, such as Stanislav Vadrna.

Robert Vermeire
As a London barman in the 1920s, Robert Vermeire compiled a recipe book that has stood the test of time. Cocktails: How To Mix Them, published in 1922, includes the original recipe for the Sidecar, among other drinks that offer a snapshot of the times. What makes the book even more notable is how it catalogs the inventors of the drinks, preserving this historical information for posterity.

David Wondrich
Few people have done more to illuminate the history of our drinking culture than David Wondrich. A top-notch mixologist, prolific writer and partner in Beverage Alcohol Resource, said to be the world’s first advanced education program in spirits and cocktails. Wondrich entertains as well as he educates.