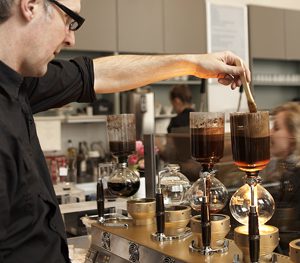 With more than a decade of experience running Blue Bottle Coffee, James Freeman has been able to perfect his brewing methods, and he’s a bit of an ace when it comes to siphon brewing. While siphon brewers (aka vacuum pots) produce a cup known for balance and smoothness, Freeman also appreciates the drama of the process. “Siphon coffee stands at the intersection of performance art and the culinary arts, and every sip is different,” he says. “Even customers who don’t order siphon coffee still watch in appreciation of the architecture of the system.” Freeman says achieving siphon brewing perfection is about creating a fast and fluid technique and moving quickly once brewing begins, so your coffee doesn’t become over-extracted. Here are his top tips for acing your own siphon sips at home (he uses a Hario TCA 3).

1. Drop the filter into the center of the upper bowl and secure with the attached hook and spring. If using a muslin filter, soak it in warm water for 5 minutes and drain prior to attaching.

2. Grind beans on a medium-coarse setting for automatic drip (the grounds should be slightly finer than what you would use in a French press) and transfer into the upper bowl.

4. Ignite the burner or place on the stovetop (depending on your vacuum pot’s heat source) and wait for water to boil. If you’re using a tableside siphon with a denatured alcohol burner, Freeman recommends upgrading to a butane burner with an integrated igniter. “Not only does butane burn cleaner, eliminating odors of alcohol while brewing your coffee, it also heats the water faster than the flame provided by the alcohol burner,” he says.

5. When water is near boiling, attach the upper bowl to the bottom bowl. When about one inch of water has risen into the upper bowl, push dry grounds into water with bamboo stirring paddle and scrape down sides. Resist the urge to stir!

6. With the burner still on, wait for most of the water to rise into to the top chamber; when it does, begin rapidly stirring in a counter-clockwise direction, creating a fast-moving whirlpool. “Aim to stir no more than 15 rotations,” says Freeman. “The goal is to create the fastest and deepest whirlpool with the minimum [number of] rotations. This will minimize destruction of the grounds.”

7. Remove siphon from the heat and cover the bottom chamber with a cool, damp towel until all of the brewed coffee has descended. The towel acts as an accelerant to quickly draw the coffee into the bottom bowl, decreasing the chance of over-extraction. If it takes longer than 30-90 seconds for the coffee to descend into the lower bowl, then your grind is probably too fine.

8. Remove the top of the siphon by gently rocking it back and forth while twisting and pulling away from the bottom bowl.

9. Pour into your favorite mug and enjoy!