Evidenced by its very title, the new cookbook from chef and restauranteur Chris Scott is a tribute to culinary traditions, highlighting an under-explored foodway through his own family history. Homage: Recipes and Stories from an Amish Soul Food Kitchen (Chronicle, written with Sarah Zorn) traces Scott’s family back seven generations, from his enslaved ancestors and family settlement in Pennsylvania up through his own childhood in Amish country and successful culinary career. Woven through the narrative, the recipes become punctuation points, like this comforting dish of spiced jerk pork on cheesy grits. “These grits are Nana all the way. And the jerk pork pays homage to Black folk who came here from the Caribbean, bringing their culinary traditions with them,” writes Scott. “Together, they’re the perfect expression of the way I cook: interweaving the influences of those who came before me.”

Note: You’ll need to start this recipe at least a day in advance.

To make the pork: In a large measuring cup, combine the rum, brown sugar, soy sauce, salt, molasses, Worcestershire, ginger, allspice, and cinnamon with 3 1/2 cups [840 ml] of water. Stir until the salt and sugar dissolve. Put the pork in a large bowl and pour the brine over the pork. Cover with plastic wrap and refrigerate for at least 4 and up to 6 hours.

To make the marinade: In a blender, purée the orange juice, rum, onion, vinegar, olive oil, peppers, garlic, thyme, lime juice, and brown sugar. Remove the pork from the brine and pat dry. Discard the brine. Using a fork or knife, poke holes in the pork butt and pour the marinade over the top. Cover and refrigerate the pork for 24 hours. Prepare a grill for indirect cooking over medium-low heat, 325°F [165°C]. Remove the pork from the marinade (reserve the marinade) and place on the cool side of the grill with the fat cap facing up. Cover the grill and cook, basting every 30 minutes with the reserved marinade, for roughly 2 1/2 hours, or until the internal temperature reaches 190°F [90°C] in the center and the juices run clear. Remove from the grill and let cool slightly.

To make the grits: In a medium saucepan over medium-low heat, combine the broth, milk, butter, and garlic powder (the liquid should have some flavor before adding the grits). Bring to a simmer. Increase the heat to medium-high and gradually add the grits, whisking continuously. Whisk until the grits are smooth and creamy but still toothsome, about 30 minutes. You can add more milk if they get too thick. Turn off the heat, add the cheese, and whisk in until combined. Season with salt and set aside, covered, until ready to use. When the pork is cool enough to hand shred, place some on top of a bowl of cheese grits, and serve warm. 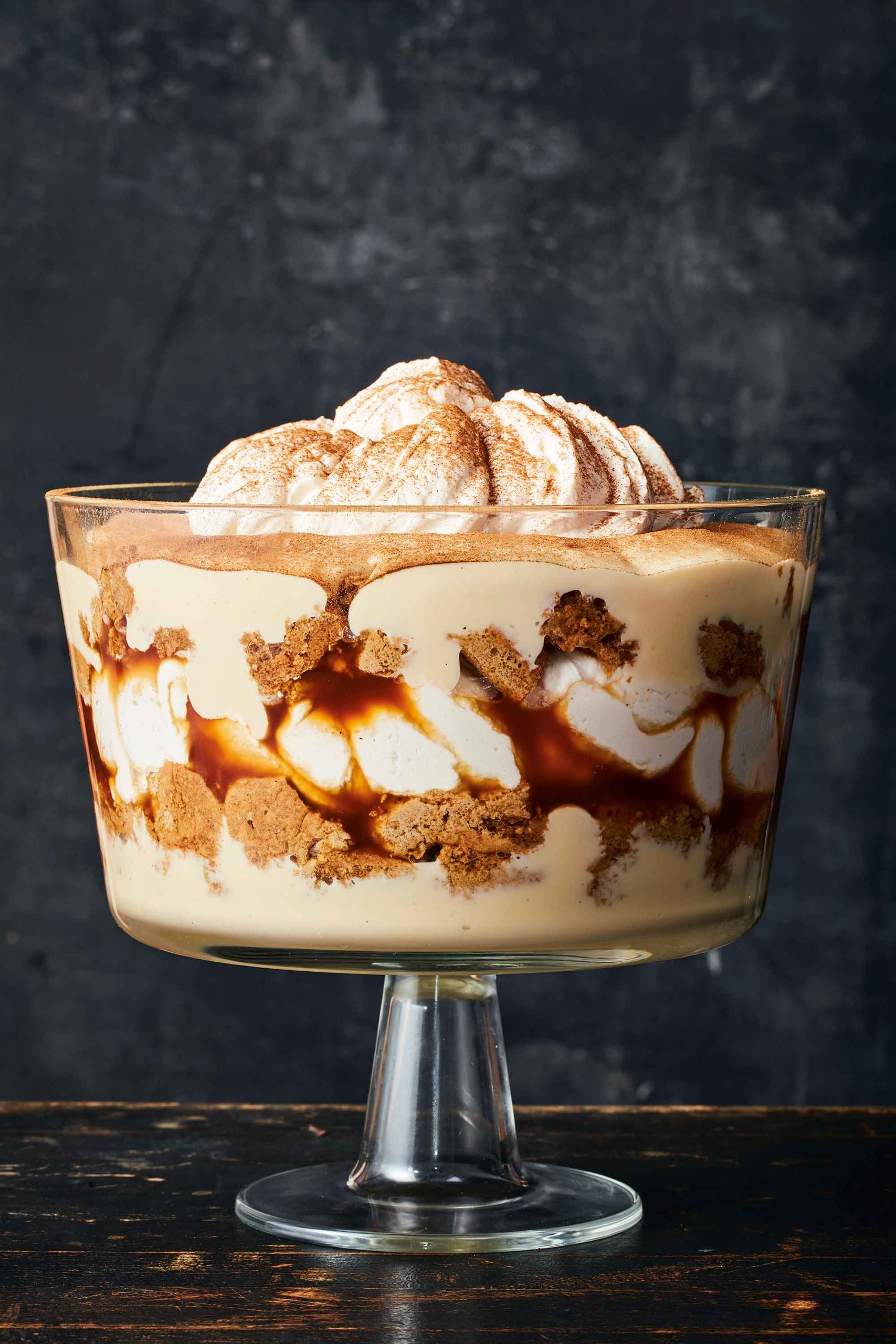 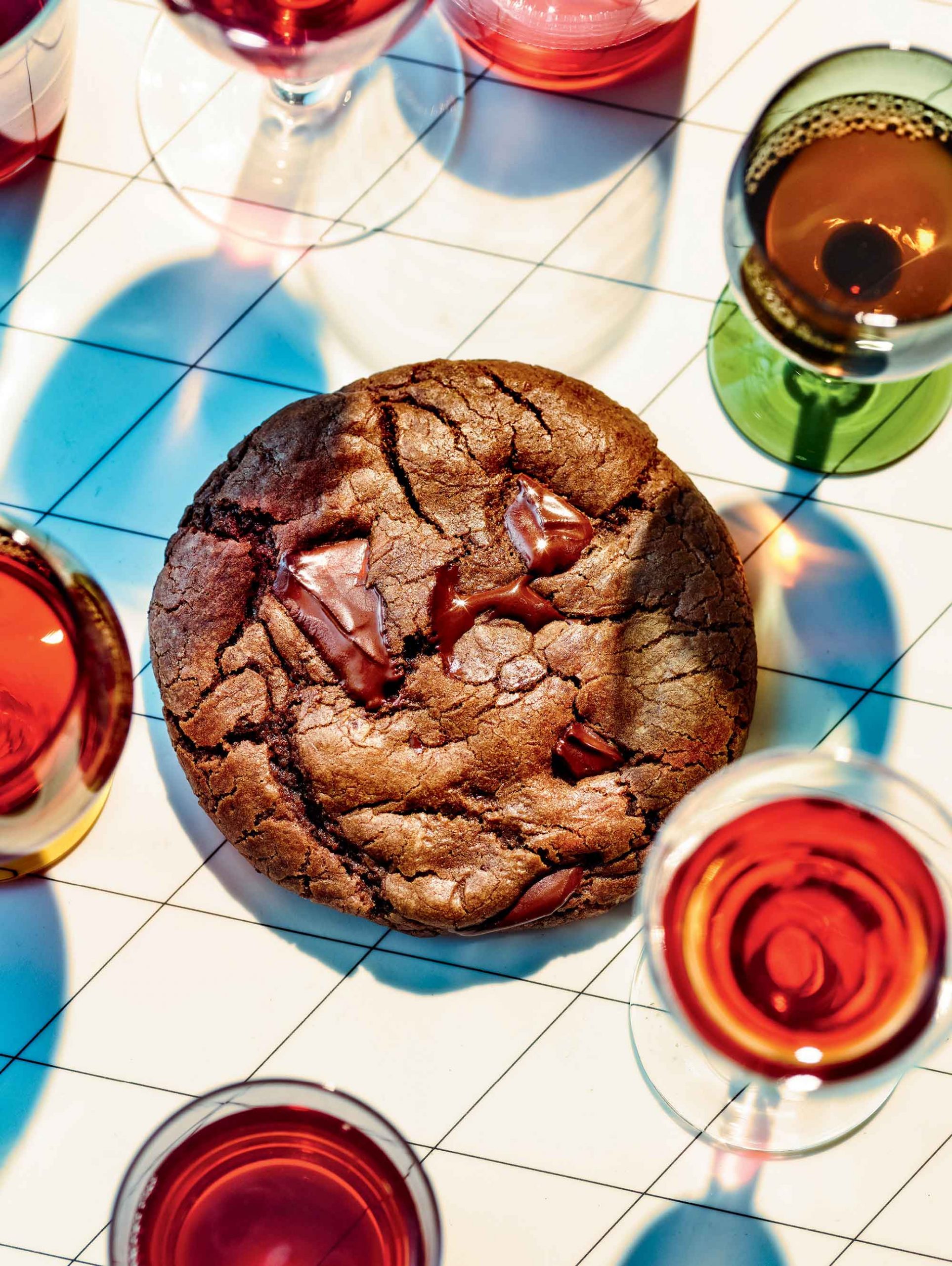 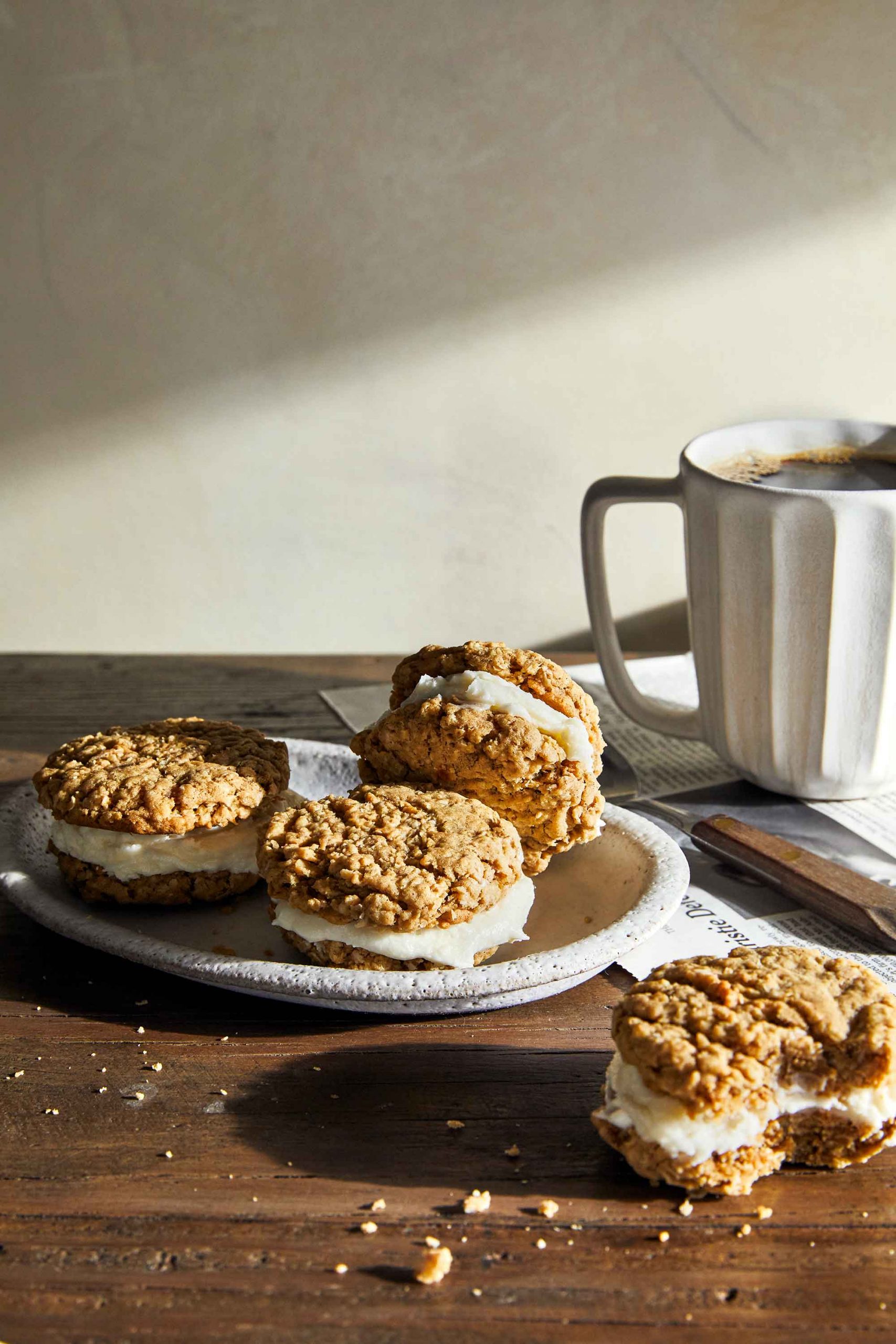 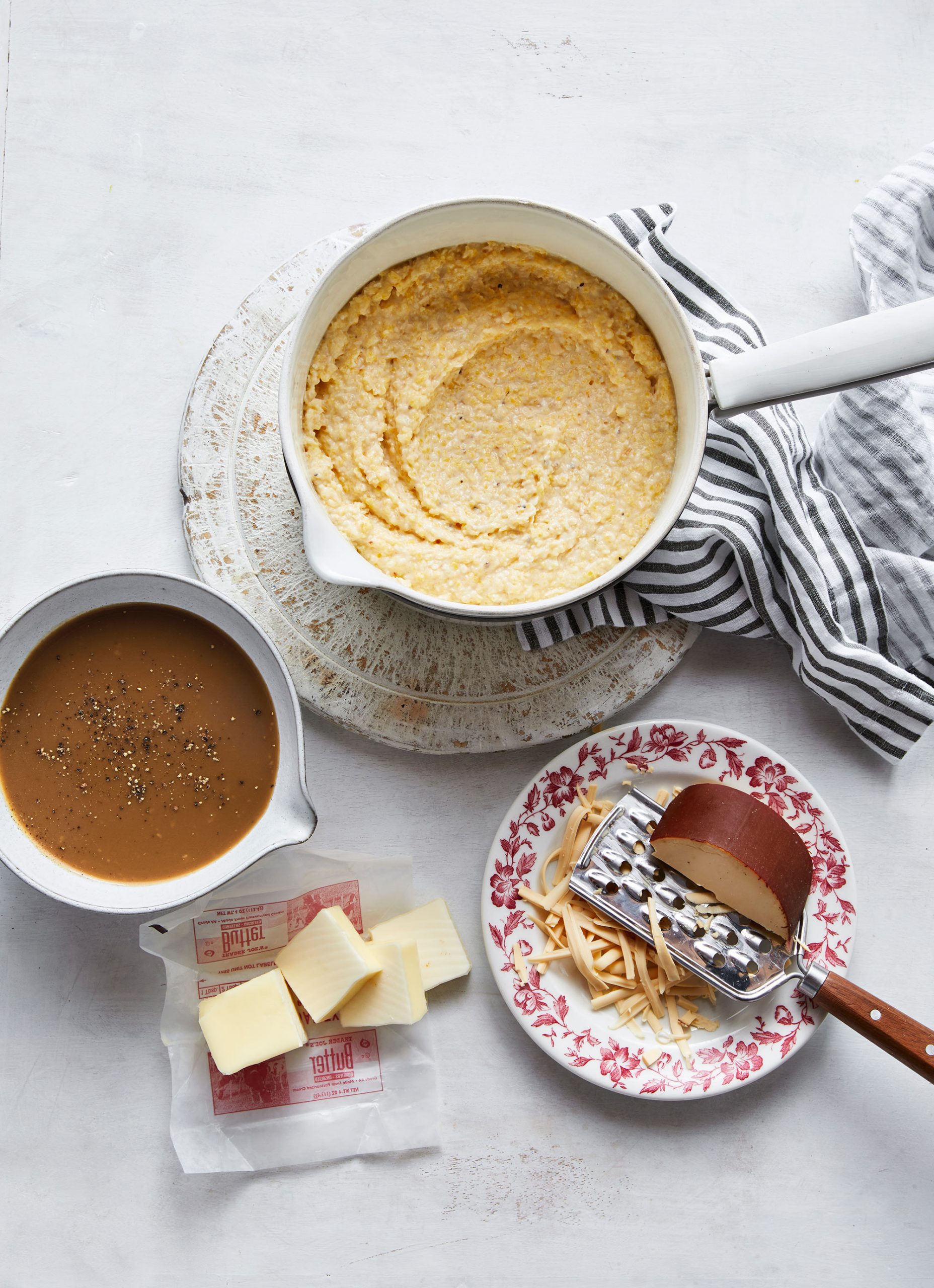 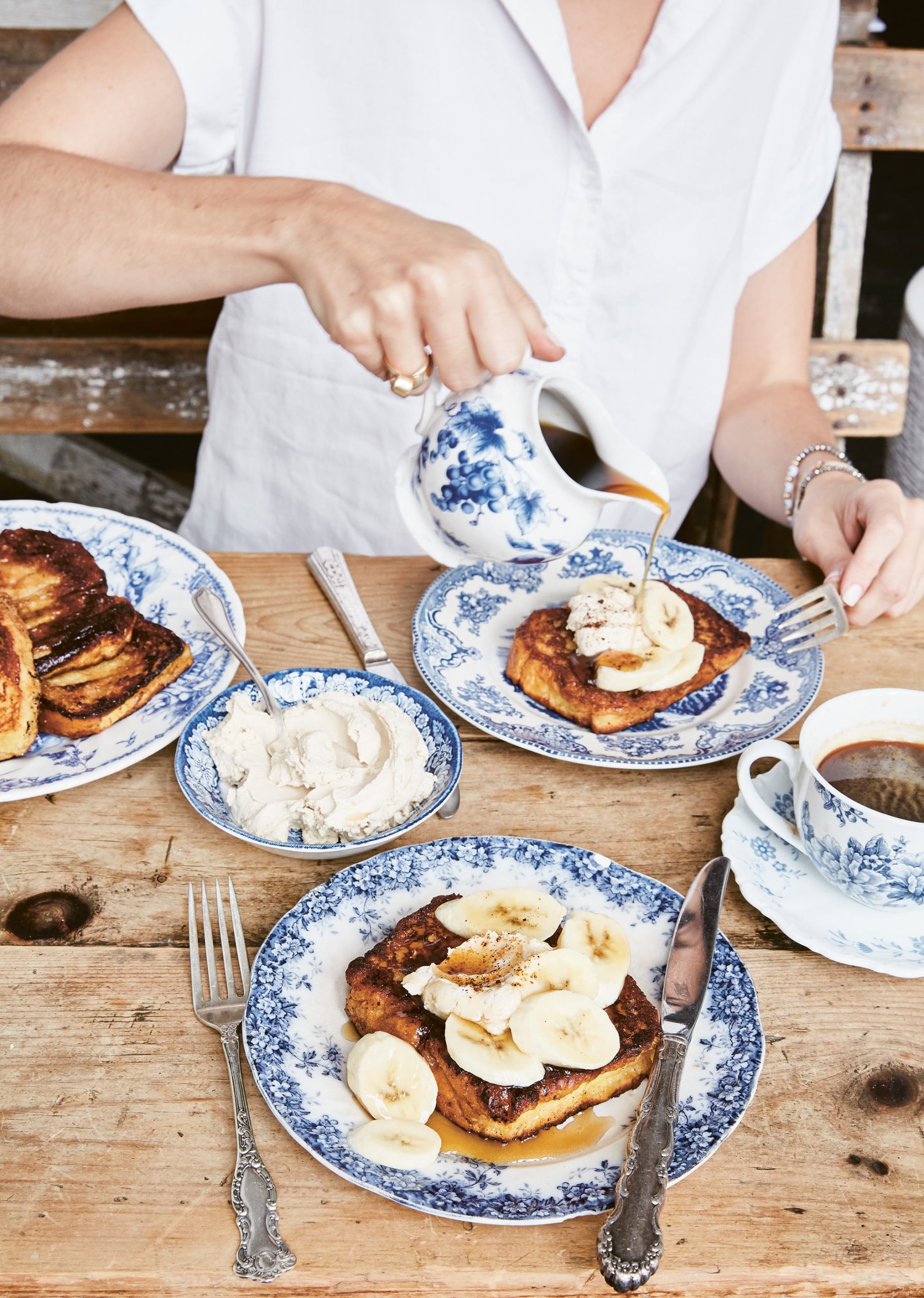