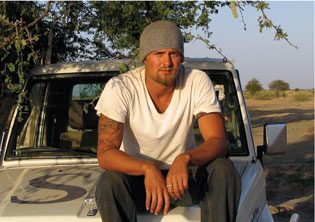 It’s one of our most basic needs, something we often take for granted every time we turn on the tap. But for millions of people across the world, access to clean, safe drinking water doesn’t exist. Determined to help end this crisis is 31-year-old bartender-turned-organizer Doc Hendley, who founded the non-profit Wine to Water in 2004. The affable, tattooed Southerner opens up about the generosity of the cocktail crowd, which bartending skills came in handy while he was living in Darfur, and how he’s using wine to make a difference.

Imbibe: How does a North Carolina bartender end up starting a non-profit organization that works with people clear across the world?
Doc Hendley: The whole time I was bartending I took an interest not just in my job, but also in my patrons. I started thinking, “What if I had something to offer them—something for them to be a part of?” So in 2003, the idea of Wine to Water came to me—I just woke up in the middle of the night and wrote it down. At that point I had no idea how bad the water crisis really was. I started researching the issue and was appalled by what I was learning. When I found out that water kills more children than anything else in the world, I was shocked, but also angry. Famine, malaria and HIV/AIDS all get tons of publicity, but for some reason, no one was talking about water. So I started thinking, “Maybe I can do something, using the regular bar crowd.” I wanted people to grab hold of this crisis and make it their own. I wanted to make a profound effect, worldwide.

Imbibe: How did you work with the cocktail crowd to put a plan into action?
DH: About a month after I first had the idea, I held an event at a bar whose owner I knew well. Without even making much of an effort, we raised $6,000—just pouring free wine and telling people about the water crisis. My initial thoughts were right on—the bar crowd loved coming out and having a good time, but they really loved having a cause to embrace. Then people starting wanting to do more events and it grew from there.

Imbibe: Have any of your bartending skills helped you in running Wine to Water?
DH: One of the biggest things I took away from bartending was my ability to create relationships. You’re only good as a bartender if you have the ability to create a relationship with the person sitting on the other side of the bar. If you don’t have the ability to make that person want to come back and hang out with you, then you’re not going to succeed. I didn’t have all the technical skills that everyone else had in the beginning, but I looked at things differently. The first place I went was Darfur, and it was six months after my first event. I lived there for a year. The thing I noticed the most was that the other organizations with the engineering skills saw water as the only problem, so they’d drill a well in the ground and then leave. Instead of just saying, “Okay, this water is dirty, so let me go and drill a well in the ground,” my first concern was to get to know these people, to see what had already been done, and to identify what has and hasn’t worked. I found out that just throwing a well in the ground that costs $10,000 isn’t always the best fix. But I had to form relationships with the people to see that.

Imbibe: What’s been one of your favorite stories from the road?
DH: I’d say it was in Darfur. There are areas controlled by rebel groups that the United Nations has labeled no-go zones—no U.N. partners are able to work in these areas. I didn’t have that problem because I got all of my money from the bar crowd, so I could go wherever I wanted. I began visiting areas where the biggest need was, and I started forming relationships with leaders, soldiers and commanders. And this is when the water crisis really started to solidify for me. I would talk with them after they’d come back from battle, and they would tell me stories about the fighting. And I asked them once, “What’s your biggest threat, your biggest fear?” And they told me it wasn’t the bullets that they’re facing day in and day out—the biggest fear is the water. The water was actually killing more people than the fighting. That was probably the most profound experience.

Imbibe: Why is the organization called Wine to Water?
DH: We started out hosting wine parties and encouraging people around the country to host parties to teach people about the water crisis. Then we thought, “Why not sell wine?” Last year we did a trial run of 5,000 bottles that sold out in a few days. So, this year we’re building a bigger portfolio of wines that benefit our water projects. We hope to have our wines in every wine shop, restaurant and grocery store in the country within the next few months.

Imbibe: And what has Wine to Water accomplished to date?
DH: As of last fall, we’ve brought clean water to about 26,500 people. It took us over five years to get to that number, but now things are building steam. We’re expecting to double that number to about 50,000 people by early summer.

Imbibe: Where do you hope to take this in the future?
DH: One of the biggest parts of our program is sustainability, and the way you do that is by continual follow-up. So every few months we go back and check on the areas where we’ve been working to be sure everything is still working well. That’s all part of that relationship-building model as well—we want to build relationships with people and have a positive impact on their lives. Right now, we’re physically working in seven countries—Sudan, Ethiopia, Uganda, Kenya, India, Cambodia and Peru—but we’re expanding, and within five years we want to reach one million people.

Imbibe: Think you’ll ever go back to bartending?
DH: I don’t think so. I don’t think there’s anything left for me in life other than this work.

For more on Doc Hendley and Wine to Water, or to make a donation, visit winetowater.org.