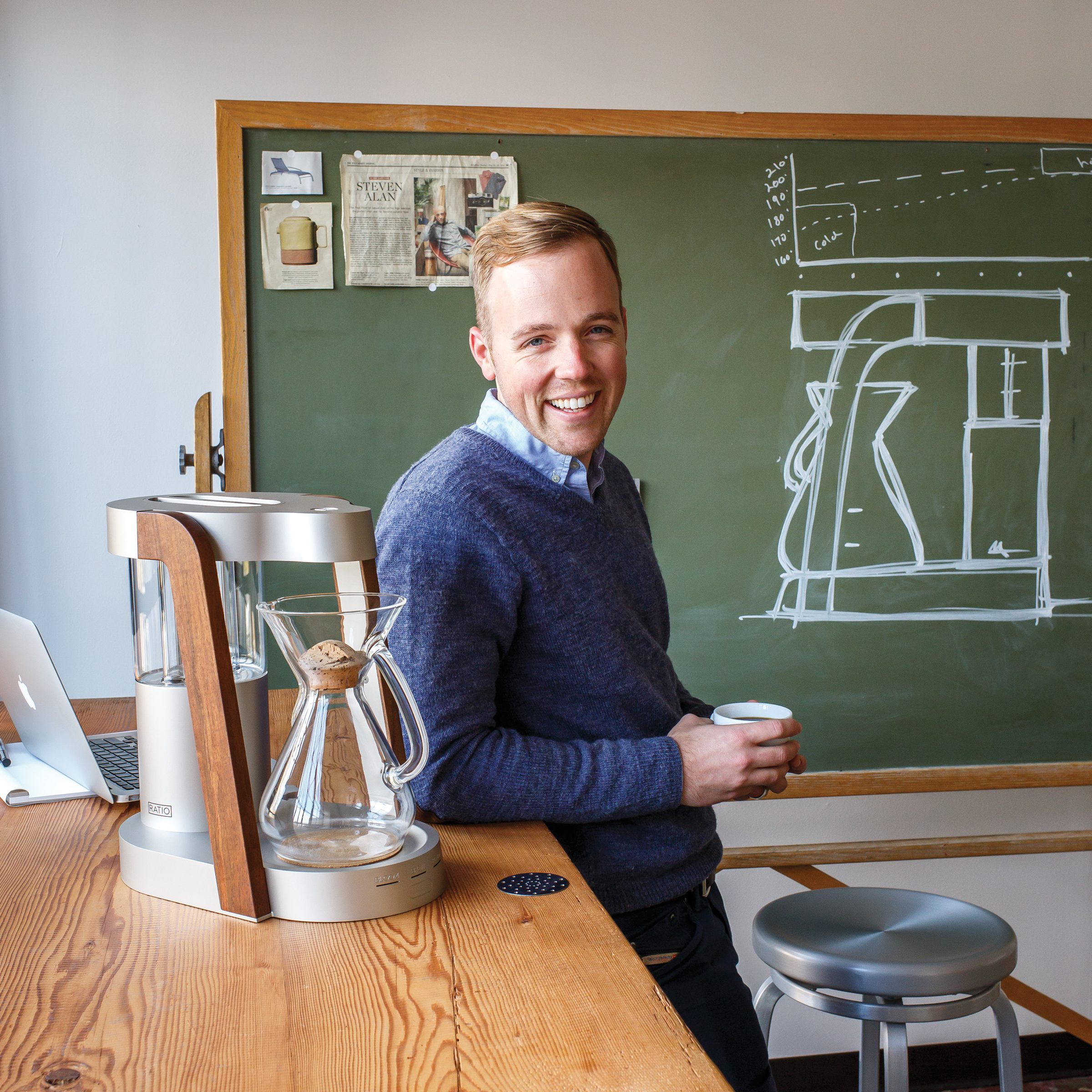 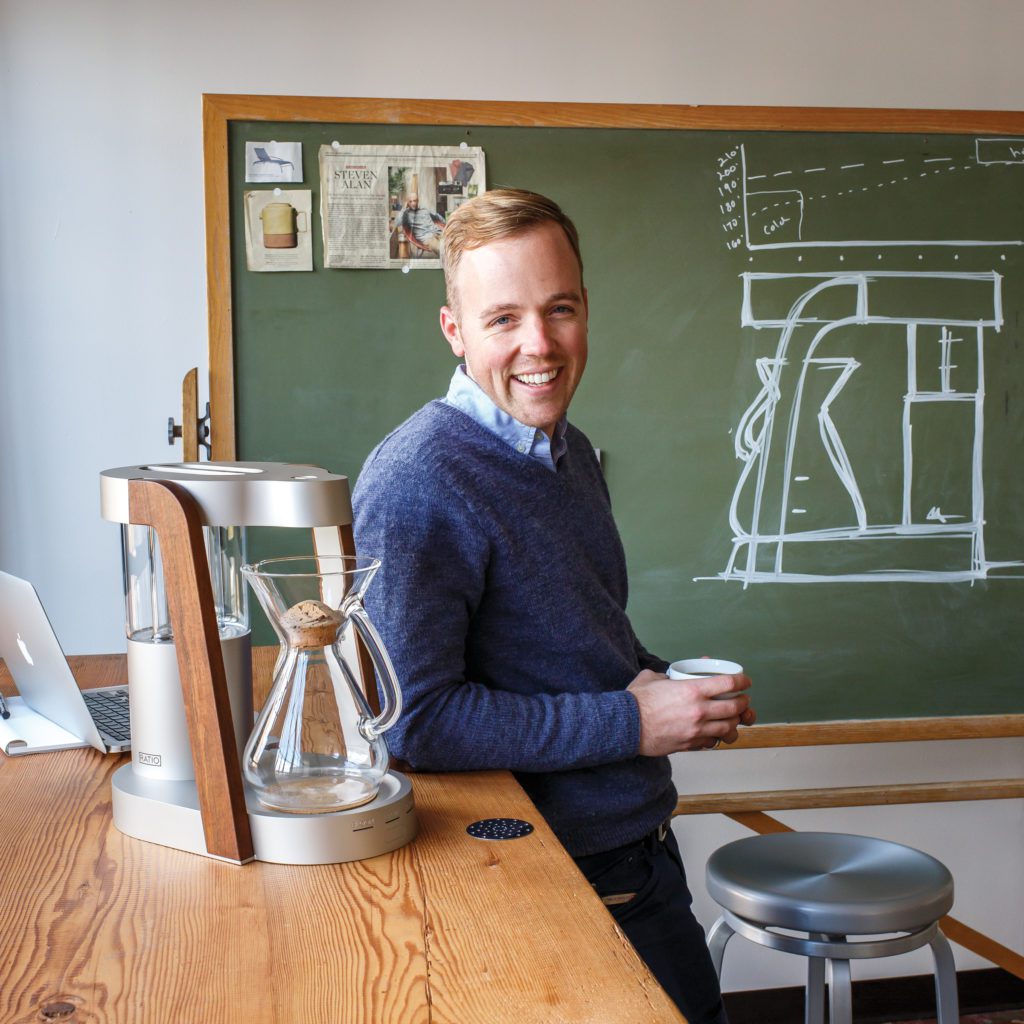 As the saying goes, “Build a better mousetrap and the world will beat a path to your door.” Portland-based entrepreneur Mark Hellweg (Imbibe’s 2014 Coffee Person of the Year) has taken this idea to heart, building a better coffee maker—the Ratio, due out this April. The Ratio promises to revolutionize the way we all drink drip. Built from die-cast aluminum, with a silky nickel finish that evokes a MacBook, with Oregon black walnut and cork accents and borosilicate water tank and carafe (think Chemex, but sleeker), the Ratio brews 40 ounces in 6 minutes, including a pre-soak “bloom” cycle, at an optimized temperature of 195 to 205 degrees F. Collaborating with industrial designer James Owen and mechanical engineer Jim Thorne, Hellweg developed a truly unique coffee maker—minimal plastic and no extraneous moving parts. Having already found success with Clive, which he founded in 2008, Hellweg knows the demand for his brewer is there, and judging by the early buzz, he’s right. So what does it take to dream up a brewer and make it a reality? Here, Hellweg offers a peek into the process, in his own words.

Three kids age seven and under make my mornings all about managing potential chaos. Before the horde comes tumbling down the stairs, I try to set aside the first hour of the day for meditation and the Wall Street Journal. Reading about other people’s challenges (and solutions) helps to put my own into perspective.

After driving my daughter to school, I’m at the office by 8:30. I have a fiendish urge to get my inbox as close to zero as possible by lunch, but this means sacrificing valuable morning energy and creativity on emails. The one productivity tip I’ve learned to follow religiously is to get the hard stuff done in the right segment of the day. For me that’s 9 a.m. to noon. If I put on headphones and turn up Chet Baker or Django Reinhardt, the work gets done.

I’m captivated by the intersection of coffee and design. I started selling coffee equipment online five years ago, and then we added a brick and mortar store because people wanted to see the equipment in person before buying. It’s fascinating to watch people react to the information you’re trying to convey on coffee and brewing equipment. Start talking about flavor profiles, dialing in a grinder, weighing by gram, dosing accurately and proper extraction: either they love it and want to know more, or they’re glancing away and hoping you’ll be done soon.

My customers tend to fall into two camps: esoterics or simplifiers. Esoterics love the arcane details, the tools and rituals to make the best cup possible. Simplifiers still want quality, but they’ll give up the marginal improvement the esoterics seek in favor of simplicity. Esoterics tend to drive innovation, and to be very good at developing standards of quality. Simplifiers tend to be the quieter majority that can help turn an ephemeral innovation into a viable, long-term success.

One is not better than the other—just different. I’ve found it easiest to match the brewing method with the level of effort people are willing to put into the process. Simplifiers shouldn’t be pushed towards a method that requires more attention to detail than they’re willing to put into it. An effortless French press or Sowden made with fresh coffee and water just under a boil will taste better than a badly prepared pourover or espresso shot.

Over the years I’ve found a few things to do for quiet time: painting, smoking pipes and making cocktails, like a Negroni. Each requires a few simple tools. If designed well—function followed by form—these tools begin to form a ritual of preparation that you look forward to, maybe even as much as the final result.

My goal in starting Ratio was to bring this level of quality and design to coffee makers. Those mornings with three little kids running around the kitchen made me begin to rely on my coffee maker, and its lack of design and excess plastic bits with sharp edges made me long for something better—a beautiful machine, not just an appliance.

I started by asking trusted advisors what they thought of the idea, and if they knew anyone else to approach. Asking a lot of questions was key. Eventually, it became clear which roles needed to be filled to design a product of this complexity.

Building an effective team is probably the most important area for an entrepreneur to focus his or her efforts. It took several months to build the Ratio team, beginning with my industrial designer, James Owen. Our mood boards were filled with beautiful products, spanning from simple, ergonomic gardening shears to a Scandinavian sewing machine. The Ratio design language began to form, from which several concepts were created and refined. This stage is pure exhilaration. It’s nothing but possibility.

Then, concepts must become reality. Our mechanical engineer, Jim Thorne, slowly and meticulously turned the art into 3D files of parts that can be manufactured. Surfaces are defined, materials found and tested, and prototypes are built. I had an emotional attachment to many of the ideas and shapes we had brainstormed, and it’s a tiny bit soul-crushing to watch these ideals slowly rolled back. At least half your dream list is deemed impossible to build, too expensive, illegal in a few states or likely to cause a kitchen fire.

The warning proved true: going from design to prototype is difficult for even the experienced. You must balance patience with urgency. You must be optimistic in order to keep it all going, yet retain a healthy amount of incredulity. You must be skeptical with vendors and their vaporous promises, and maybe even more so of your own blue-sky plans and precious spreadsheets.

At every point of resistance (and trust me, there are many), you have to decide whether to persevere through it or pivot to some other alternative, to borrow the invaluable advice of Eric Ries and the Lean Startup crowd. Perseverance is the first choice, but you pivot to another iteration if enough testing shows that your initial assumption was false.

We hit a wall with a glass water tank. The designed and engineered piece was a beautiful convex shape that looked like an architectural model. The glass manufacturers initially said they could make this part, but repeated trials failed to produce a part to our specifications. After two months of tweaking the approach and working through multiple vendors in several countries, we ended up pivoting to a simpler round shape. At this point, it felt like failure. We gave up some of the striking lines of the initial shape, and in the moment it felt like the overall design was now greatly diminished.

Fortunately, a good team can rally through challenges like this, and we continued to refine the simpler design until we felt the design was complete. Now, when I pass the sample parts of the first tank design, I have to admit to myself that the simpler shape is actually better.

The next and final phase is production. We’ve sourced individual parts from quality-focused manufacturers in Asia, Eastern Europe and the U.S., which will be shipped to Portland to be assembled. We’re not assembling in Portland to be trendy. The reason is simple: at an early stage, it’s easier to manage for total quality if you oversee assembly, packaging and distribution yourself.

The so-called “artisan manufacturing” trend might prove to be a return to quality in an age of many disposable things. My vote is that’s a good thing.