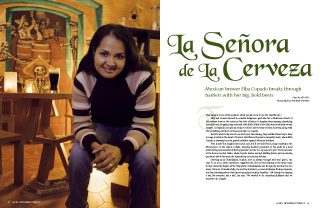 Tlaquepaque is one of those places where people come to see the “real Mexico.”

Men and women dressed in colorful indigenous garb line the cobblestone streets of this artisan town in the center of the state of Jalisco to display silver earrings, friendship bracelets and shopping bags adorned with Frida Kahlo’s face laid atop intricately woven serapes. A mariachi cacophony seeps out of just about every wooden doorway, along with the tantalizing smells of carnitas and chiles en nogada.

But if tourists truly want to see history in the making, they will find their way to Beer Lounge, located in the heart of town in the Plaza Artesenal on Avenida Juarez, where Elba Copado is brewing her own private rebellion against Mexican tradition.

Peek inside this neighborhood pub, and you’ll see that Beer Lounge maintains the Mexicanismo of the streets outside. Dancing skeletons (painted on the walls by a local artist during a beer-induced frenzy) preside over the 700-square-foot pub. Customers laze at the dozen wooden tables, while Copado buzzes around refilling drinks and answering questions about the beers she dreamed up in her home kitchen.

Growing up in Guadalajara, Copado, now 27, always thought beer was “gross,” she says. So in 2003, when a professor suggested she choose beer-making as the thesis topic for her chemistry degree at the University of Guadalajara, she thought he had had one too many Coronas. Coincidentally, she and her husband, 30-year-old lawyer Enrique Aguirre, had been floating around the idea of opening a business together. “We thought of opening a bar, but everyone has a bar,” she says. “We wanted to do something different and we wanted to do it right.”

At her professor’s suggestion, she and Aguirre headed to Mexico City to visit Beer Factory, at the time one of only six breweries in the whole country, in order to try some of the pub’s famous fruit-flavored beers. It was there that she discovered that beer could offer more than the mass-produced brands she had grown up with. The couple’s next long-distance beer run came three months later when they traveled to TwoRows restaurant and brewery in Houston, Texas. Elba was a few sips into a sweet Hefeweizen when she had a revelation. “I looked at Enrique and said, ‘I can do this, I’m a chemist!’” she says.

After her “aha” moment, the couple found the nearest grocery store, bought all the international beer they could find, and brought it back to their hotel room for a taste-test. They also made a deal: Aguirre would take care of all the business, and Copado would master the beer.

While Copado may have had a supporter in Aguirre, no one else wanted her to follow her new ambition. Friends, relatives and even strangers told her she should stay home and take care of her family. Instead, after hearing a professor mention a three-month brewing program at the Siebel Institute of Technology and World Brewing Academy in Chicago, Copado headed north to enroll. She returned to Mexico after the three months were over, eager to begin working on her and Enrique’s dream of opening a brewpub.

The commercial landlords of Guadalajara, however, weren’t quite as ready. Location after location in Mexico’s second-largest city denied the couple permission to lease. “They just didn’t get it,” she explains. “They thought we were something clandestine.”

Finally, Copado found a sympathetic soul in Tlaquepaque, an artist enclave east of Guadalajara. As it happened, the manager of the Plaza Artesenal was married to a Canadian man and loved Copado’s beers.

The couple’s next major challenge became clear when Copado started calling suppliers. Her calls went unanswered. Men in Mexico take their beer seriously, and nobody believed this petite young woman with a ponytail needed mugs and kegs. (Aguirre started calling instead and got replies immediately.) Even 24-year-old Adrian Garcia assumed Aguirre was the brewmaster when he began working at Beer Lounge. “I thought I would come in and find Enrique behind the counter,” he says. “I thought you had to be a man to like beer.”

The next battle came in the form of a stubborn consumer base. “When we started, nobody wanted to come in,” Copado says. “I couldn’t even give the beer away for free.” Tapatios, as the residents of Guadalajara are known, are notorious for being picky and unadventurous when it comes to their buying habits. It’s not uncommon for Japanese restaurants in town to include fried chicken as a sushi ingredient because they know their customers will be reluctant to try new food. Copado says they same is true for her patrons. Hardly a day goes by, she says, when a new customer doesn’t come in asking for a Corona “because the commercials say it’s the best in the world.” Her response? “Harry Potter sold a lot of copies, but it doesn’t mean it’s the best book in the world.”

Still, Copado’s local customers have slowly come to realize that she’s not trying to poison them with a magic spell. Ironically, one of her best sellers is “Halloween,” a dark Irish-style stout with a balance of coffee and toasted malt flavors. Customers also come in asking for her “Mule Kick” Indian Pale Ale, so named because it’s said to be “like a kick in the head.” Although the IPA has an 8-percent alcohol makeup, its hoppy bitterness balances any strong alcohol flavor.

Beer Lounge newcomers can’t be blamed for not knowing much about specialty brews. The Mexican market is dominated by Grupo Modelo (maker of Corona, Pacifica and Negra Modelo) and Femsa (the family-owned proprietor of Dos Equis and Tecate). And Femsa controls most of the malt that’s imported into Mexico, making it even more difficult for brewers like Copado. To acquire malt, she and Aguirre drive to the U.S., bringing it back themselves and paying $1,300 a ton—nearly double the Femsa rate, after all of the expenses of import and export taxes and gas are accounted for. She also got so fed up with trying to find someone to sell her hops in Mexico that she started buying supplies on Ebay. “Everything is difficult,” she says. “The big companies get priority on supplies and we’re always having to adjust. If I can’t find something, I have to alter my recipes.”

Although Copado’s compatriots have been cause for frustration, she says her international clientele have inspired her to continue perfecting those recipes. When a new gringo stops in, the dimpled young woman—a fan of Billy Idol and shopping at Target—comes to life, ready to wax poetic about her Indian Pale Ale and the additional 18 brews on the Beer Lounge menu. “I love when gringos come in,” she says. “They know their beer and they’ll sit around long enough to enjoy it.”

Beer Lounge is situated just steps away from a Tapatio Tours bus stop, making it a convenient retreat for tourists. People visiting from Germany, Australia and Poland have all stumbled upon the pub, which also benefits from being within driving distance of the expatriate communities of Lake Chapala and Ajijic. Many of the 50,000 American and Canadian residents of those towns have made the hour-long trek to sample Copado’s brews. One of those fans is Herb Hazen, a former Seattlite. The 68-year-old retired pilot liked her beers so much that he decided to make them the featured beverage when he opened his restaurant, Olé Olá, near his home in Ajijic. “I really wanted to be able to order something [other than] Modelo or Corona,” he says. “I wanted to be able to show people there’s an alternative.”

Like many of Copado’s customers, Hazen was at first enamored by the novelty of finding a female brewmaster south of the border. “I was surprised because it’s such a macho culture down here,” he says. “Anything thing that smacks of manly culture is usually pretty closed off to women.”

But it’s Copado’s adaptability and ingenuity that has kept him interested. “I told her in this hot weather that she doesn’t want to be making a dark, heavy beer,” he says. “So she made some wheat beers, and they’ve been very good.”

Indeed, adaptation is what has kept Copado going all along. Before her son, Jose Enrique, started walking, she would hold him in one arm and stir ales with the other. Her small family shares their one-bedroom home with macerator pumps, fermentation tanks and a makeshift experimentation lab, though she hopes to eventually make enough money to move the brewing equipment out of the house and perhaps into a larger establishment.

All indications are that she’s well on her way to reaching that goal. Beer Lounge celebrated its first anniversary in July, and overall production is up 50 percent—from 200 liters a week to 300. Now it seems the only thing she has left to adapt to is success.

“I imagined I would do well, but not this well,” she says. “It’s been an explosion.”