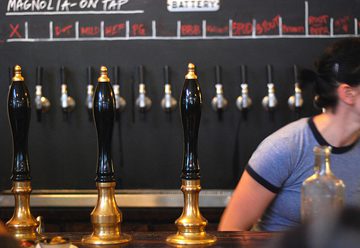 Ever wonder what makes “real ale” real? It might sound like philosophical fodder, but this brew’s identity is anything but existential. In fact, the outlook for “real ale” (aka cask beer) has never been brighter. An English import from old countryside pubs, unfiltered cask beer can be an acquired taste, but for a growing number of beer bars around the U.S., these naturally carbonated, cellar-temperature brews offer the ultimate expression of a well-made beer. In our Sept/Oct 2012 issue, we highlight five spots around the U.S. that have tapped into the cask beer trend, and with the help of cask ale guru Alex Hall, here we highlight a dozen more spots pouring expert pints of the real stuff.

Bailey’s Tap Room
Since 2007 this downtown Portland beer bar has kept a mix of thirsty business professionals, college students and tourists sated with an ever-rotating selection of hard-to-find microbrews, including two always-tapped firkins. Want to know how much of a certain beer they have left? A digital display at the front of the bar shows exactly what remains in each keg. 213 SW Broadway, Portland, OR; 503-295-1004; baileystaproom.com

d.b.a. Brooklyn
This friendly neighborhood beer bar offers three cask ales on hand pumps, and they also host occasional festivals with more than a dozen tapped casks. 113 N. 7th St., Brooklyn, NY; 718-218-6006; drinkgoodstuff.com/ny
Firkin
A firkin is a traditional nine-imperial-gallon cask, one or two of which (depending on when you go) are tapped here along with more than 20 drafts and a couple dozen bottled beers. 515 N. Milwaukee Ave., Libertyville, IL; 847-367-6168;firkinoflibertyville.com

Mahar’s
Read the infamous rules and regulations before entering and you’ll be rewarded with a choice of no less than six cask ales. 1110 Madison Ave., Albany, NY; 518-459-7868; itsonlybeer.com
Pints Pub Brewery and Freehouse
Housed in a rambling building that’s more than a century old, this might be as close as you can get to actually experiencing cask ale in England. 221 West 13th Ave., Denver, CO; 303-534-7543; pintspub.com
Rattle ‘n’ Hum
This is the ultimate Irish bar, professing “no crap on tap” and offering several casks—plus occasional festivals with up to 30 tapped casks. 14 East 33rd St., New York, NY; 212-481-1586; rattlenhumbarnyc.com