Best Coffee and Doughnuts in America 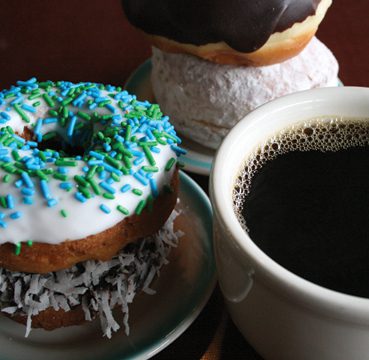 October is National Doughnut Month, and nothing washes down pillow-y puffs of fried perfection better than a cup of coffee. But for such a perfect match, many doughnut shops tend to focus more on the quality of their doughnuts than their coffee. Thankfully, a growing number of doughnut houses are upping the ante. Here are eight spots across the country serving coffee that’s as good as the doughnuts.

Crescent Bakery
Located just blocks from the beaches of Lake Michigan, this family-run bakery was originally built in 1907 and has long been a favorite for locals and out-of-towners alike for their classic glazed doughnuts, Boston creams and locally roasted coffee from Leelanau. 404 Main St., Frankfort, Michigan; 231-352-4611;crescent-bakery.com.

Mighty-O Donuts
Mighty-O goes all organic with their doughnuts, and the result is pure deliciousness. The flavors are all pretty traditional, and the style is classic cake doughnut—they even have mini O’s. And the coffee? Also organic, of course, and roasted locally by Stumptown and Caffe Vita. 2110 N 55th St., Seattle; 206-547-0335; mightyo.com

Sublime Doughnuts
The name at this Atlanta doughnut shop says it all. Kamal Grant first got a taste of the doughnut life when, at 14 years old, a Dunkin Donuts employee spoke during career day. From then on he had visions of living the sweet life, and after turns in the Navy and with the Culinary Institute of America he opened up shop near Georgia Tech offering his signature A-Town Cream alongside the more outlandish Reese’s Peanut Butter Cup and fresh French-pressed coffee from Atlanta Coffee Roasters. 535 10th St. NW, Atlanta; 404-897-1801; sublimedoghnuts.com

YoYo Donuts & Coffee Bar
A Clover coffee brewer in suburban Minnesota? Sounds too good to be true, but this Minnetonkan café does coffee and doughnuts right with single-origin coffees from local Dogwood Coffee Co. and espresso blends made on their faithful La Marzocco 2-group all served alongside traditional (and some less-traditional) yeast and cake doughnuts, like their lemon-filled long john, sour cream old fashioned and the popular maple bacon bar. 5757 Sanibel Dr., Minnetonka, MN; 952-960-1800; yoyodonuts.com