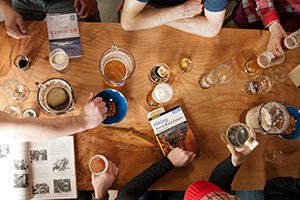 Often referred to as “Beervana,” Portland, Oregon, boasts more than 70 breweries in the metro area, and counting. Ready to wet your whistle? Here are a few of our favorite Rose City brewpubs.

Breakside Brewing
Boundary-bending Breakside is always experimenting—last year alone it barreled close to 100 different beers. Stop by their north Portland restaurant and pub brewery for a tasting tray filled with favorites and new beers alike, like the jasmine- and peppercorn-spiked saison, an 11-percent triple IPA (made with an astounding seven pounds of hops per barrel) and the Bourbon Woody, an English-style ale aged for seven months in bourbon barrels.
820 NE Dekum St., breakside.com

Cascade Brewery Barrel House
Sour beer lovers pucker up at this Belmont District brewery for funky, often fruit-flecked brews like the Cherry Bourbonic Plague, Sang Noir and the Raspberry Wheat. Head in for the brewery’s Tap-It Tuesday, when a new sour barrel of beer is ceremoniously tapped each week.
939 SE Belmont St., cascadebrewingbarrelhouse.com

Coalition Brewing
Pooch in tow? Head to the patio at the 10-barrel Coalition Brewing for pints of its house creations, like the low-abv Wu cream ale and Loving Cup Maple Porter, or a taste from the brewery’s Coalator Program, which invites a local homebrewer to come in and collaborate on a beer.
2724 SE Ankeny St., coalitionbrewing.com

Hopworks Urban Brewery
On two wheels? Pedal south to this bike-friendly brewery which has quickly became a local institution for both beer- and bike-loving crowds—it’s two-story brewery and restaurant is decked out in hundreds of hanging bike frames, and the side patio in summer is not to be missed.
2944 SE Powell Blvd., hopworksbeer.com

Rogue Brewery
With 38 draft lines pouring a mix of the brewery’s close to 50 rotating beers, this cozy brewpub is worth a stop to taste the popular Dead Guy Ale, Mocha Porter and any of the company’s one-off brews.
1339 NW Flanders, rogue.com

Tugboat Brewing
This downtown micro-brewery is as beloved for its English-style strong ales as it is for its convenient location around the corner from stripclub Mary’s, another Portland institution.
711 SW Ankeny St., d2m.com

Widmer Brothers Brewing
Widmer was among the first to put PDX on the craft beer map when it fired up its mash tuns in 1984, and today tourists flock to its Gasthaus for pints of its flagship Widmer Hefeweizen, brewery tours, brats and experimental pub-only beers.
955 N. Russell St., widmerbrothers.com