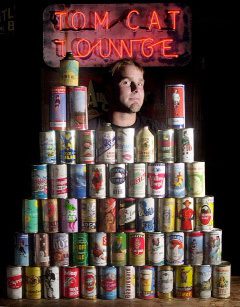 99 bottles of beer on the wall? Try more than 80,000 cans. Jeff Lebo started collecting beer cans in 1975, and today he boasts the world’s largest collection, all of which he displays throughout his Pennsylvania “House of Beer Cans.” We recently featured Lebo in “Brewery Confidential” from the September/October 2011 issue, and here he chats with us about the first can that launched his collection, how it’s not always what’s on the inside that counts, and the elusive cans that keep him searching.

Imbibe: First, we have to know: What was the first can that started your collection?
Jeff Lebo: A Schmidt’s Bicentennial can made for the American Bicentennial in 1976.

Was there a specific moment when you decided to become a can collector, or is it something that just happened gradually over time?
Jeff Lebo: I started when I was 14 years old. For some reason, back then it was a very popular hobby among teenage boys. Some friends of mine were collectors, and I got the bug from them. Also, my dad worked for American Can Company in Lemoyne, Pennsylvania when I was a kid, so I’m sure some of the fascination came from him.

Imbibe: Do you have a favorite can in your collection?
Jeff Lebo: Not a specific can, but a specific type of can. My favorite cans are flat tops and cone tops. Flat top cans required a special opener to get at the contents. These were produced starting in 1935 until the invention of the ring pull in 1962. Some brands kept the flat top until the early 1970s. Cone tops began in 1936 and were phased out in the 1950s and ‘60s. They have a spout on the top and have a crown cap, just like a bottle.

Imbibe: Will you add just about any can, or are you looking for something specific?
Jeff Lebo: I collect all beer cans, new and old, every size and type, from everywhere. My main passion though, is older, vintage cans.

Imbibe: Have you ever had to drink a really bad beer just because you wanted to keep the can?
Jeff Lebo: Definitely. I remember about 10 years ago, my wife and I went on a two-week collecting trip to England. I rented a van and drove all over the country, collecting anything new I could find. After two weeks I had hundreds of different cans … all full. The night before we flew out of Heathrow, we pulled the van into a parking lot, took out all the cans and lined them up on the curb, and emptied them into the storm drain. We did have a rule that we had to at least try a little of each. There were some pretty horrible ones.

Imbibe: Which can has traveled the farthest to become a part of your collection?
Jeff Lebo: China and South Africa would probably be the farthest. I have yet to get any cans from Mars or any other solar system or galaxy.

Imbibe: Has a complete stranger ever sent you cans to add?
Jeff Lebo: Yes, people read about my collection through my website, and some have actually sent me cans that were owned by their grandfather or cans that they acquired while traveling overseas.

Imbibe: What’s the strangest reaction you’ve had to someone seeing your collection for the first time?
Jeff Lebo: Well, as my wife says, the reaction tends to break down on gender lines. Most men tend to be really amazed and impressed—that whole man-cave thing, you know? Women, not so much. That’s probably too much of a generalization, but it’s generally my experience. No matter what, having an appreciation for it requires some knowledge about what it is what you’re seeing. This hobby, though, requires people to think outside the box a little more than usual.

Imbibe: What do you think has been the biggest change in beer cans that you’ve noticed over time?
Jeff Lebo: The cans have become much lighter. In 1935 through the 1940s and early ‘50s, the first beer cans were made of extremely heavy-gauge steel. Now, most are made of very thin aluminum.

Imbibe: Is there that one special can that you’re looking for to complete your collection, or will you just keep growing it indefinitely?
Jeff Lebo: I have a list of perhaps 500 or so cans that I’m looking for from all over the world. These are very elusive, older cans from 1935 to about 1970. It is very doubtful that I’ll ever get them all, as some of these are no longer known to exist. Because they were designed to be disposable items, there was almost no reason for people to hold on to them, which is the reason they are so rare and valuable. In addition, some places, like the British Isles, melted down any steel they could find during World War II, which makes British cone top cans from that era very desirable.