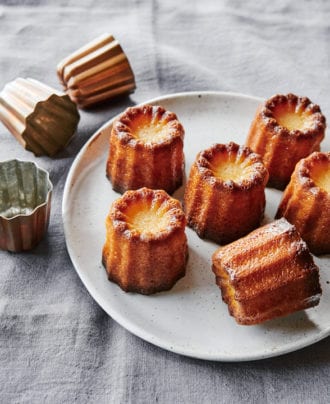 At Carr’s Ciderhouse in Massachusetts, the estate-grown apples that make for crisp bottles of cider also inspire creativity in the kitchen. In their Ciderhouse Cookbook, authors Andrea Blum, Nicole Blum and Jonathan Carr provide their take on canelés with an autumnal twist on the traditional French pastry, swapping rum for apple brandy. “Canelés, one of our favorite sweets, are soft bites of flan baked in a special mold, yielding a crispy caramelized shell that leaves you wanting another,” say the authors.

*Flexible silicone canelé molds are easier to use and less expensive than tradition copper molds.

In a small saucepan over low heat combine 2 cups of the milk, the butter, the bay leaf and the vanilla bean seeds. Warm until the butter melts, about 5 minutes. Turn off the heat and let the liquid cool for 5 minutes then remove the bay leaf.

While the liquid mixture cools, in a medium bowl add the egg yolks, sugar, apple brandy and remaining 2 cups milk, whisking to combine. Add the flour and salt, stirring again to combine. Slowly pour the warm milk and butter mixture into the flour mixture, stirring continuously. Transfer the mixture to a covered pitcher and refrigerate for 24 to 48 hours. (This step is crucial as it allows the flour to hydrate.)

When ready to bake, preheat oven to 425 degrees Fahrenheit and chill the canelé molds in the freezer for 30 minutes. Remove the batter from the refrigerator and let it come to room temperature. If some separation has occurred, gently whisk to combine.

Place the apples and cinnamon (if using) in a medium bowl and toss together. Place the chilled molds on a baking sheet and rub them with olive oil. Fill each mold with batter up to about ⅛ inch from the top. Place a small spoonful of apples on top of the batter in each mold unit (it’s okay if they sink).

Bake them in the oven for 5 minutes, then reduce the heat to 375 degrees and bake for 1½ hours or until the canelés are caramelized (deep brown) on the outside. Turn the trays around halfway through the baking time. After removing the canelés from the oven let them cool before releasing them from the molds. They are best eaten the same day.

Quick and easy pickles with a kick.